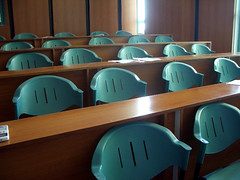 How computers change the way we learn
[Via BBC – Future]

Can technology improve the way we learn and think? Google’s head of research argues we’re headed into a new era of education.

Will we fear tomorrow’s internet? “This discovery of yours will create forgetfulness in the learners’ souls, because they will not use their memories,” a concerned commentator once spoke of a new technology. “[People] will be hearers of many things and will have learned nothing; they will appear to be omniscient and will generally know nothing; they will be tiresome company, having the show of wisdom without the reality.”

The commentator? Socrates, quoting an Egyptian king. And the technology? Writing.

Two thousand years later, the technology has changed but the dialogue remains the same. Facebook, smartphones, and video games are all supposedly bad for us: damaging our concentration, or leading to falling grades.

Couple this with another article about 5 year olds learning how to code in new digital classrooms and you have a recipe for real disruption as we shift our schools from learning useful for the Industrial Age to ones more suitable to an Information Age.