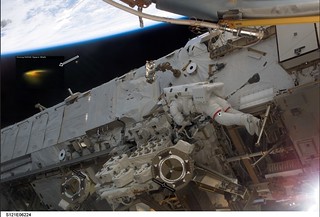 The U.S. still spends more on space than every other country—combined
[Via Ezra Klein]

Ever since NASA retired its last space shuttle in 2011, American space travel has taken a back seat to news of growing Chinese space ambitions, Indian Mars missions, Iranian space chimps, and Russian space geckos. But make no mistake, the United States is still the global powerhouse in space spending.

Last year, the United States spent roughly $40 billion on its space program, which is more than every other country combined, according to a new study (pdf) by the Organization for Economic Cooperation and Development (OECD). For comparison, China’s space budget, which is the second largest in the world, was just under $11 billion in 2013; Russia’s the third largest, was roughly $8.6 billion; and India’s, the fourth largest, was about $4.3 billion.

NASA’s budget is about $18 billion. So less than half of the US space budget goes to them. The rest, while it includes NOAA and such, is mostly from the military budget.