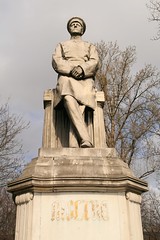 Helmuth von Moltke the Elder – one of the most important military minds that most everyone has never hear of. He insights are what made the Prussian army such a force.

In the 19th Century he wrote:

“No plan of operations extends with certainty beyond the first encounter with the enemy’s main strength” or pithier, as Colin Powell stated, “No battle plan survives contact with the enemy.”

He also saw that, if war was now too complex to accurately develop plans before hand, than even detailed strategies would not be effective. No amount of planning could foresee all the things that needed to be done.

No authoritarian strategy could really lead to winning tactics. What was needed was a system that dispersed control away from the central power of generals and allowed other officers the ability to alter strategy with respect to exigent circumstances.

Strategy is a system of expedients. It is more than science, it is the translation of science into practical life, the development of an original leading thought in accordance with the ever-changing circumstances. It is the art of acting under the pressure of the most demanding conditions…That is why general principles, rules derived from them, and systems based on these rules cannot possibly have any value for strategy.

General principles and  specific rule-based systems have no value for creating a winning strategy. You can try and develop one before battle starts and hope you have it all figured out, but you must also have in place a way to change as battle changes the table..

All you can do is create an organization that can quickly adapt and respond to the changing conditions. The winners of any battle seen today are those that can most rapidly adjust.

This selects for organizations that are able to best balance the ability of hierarchical authority to get things done with distributed democracy, which are great at adapting to change to find the best answers.

Anyone who expected our first responses to Ebola to be100% successful has never been involved in real battle, where things going according to plan are rare and amazing.

In the real world, something was going to go wrong. The adaptive organizations quickly respond and adapt after battle is engaged.

As Helmuth saw, if an adaptive group is held back from responding because authority maintains too great a hold over a strategy that no longer works, well, then that group will lose.

We have been held back, I believe, from successful approaches  by just such an authoritarian process but I see real signs that the adaptive approaches are starting to take hold.

Let’s see if some else has read Helmuth.