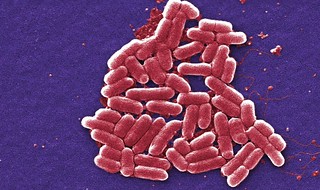 The incidence of eating disorders (EDs) such as bulimia and anorexia nervosa somewhere between 5 to 10% of the population but there is very little understanding of the biological mechanism that is the source of the disease. Given that mood disorders such as depression and schizophrenia have roots in biochemical imbalances, there is speculation that eating disorders can be traced to a similar cause.

Now researchers at the French Institute of Health and Medical Research and the University of Rouen in France have found strong evidence that a protein made by intestinal bacteria are a causative agent for the disorders. Specifically, antibodies made by the host against this protein cross-react with a mammalian satiety hormone. The severity of symptoms in ED patients was also found to correlate with levels of the neutralizing antibodies. The researchers believe that this understanding will ultimately lead to a chemical therapeutic strategies to correct eating disorders.

Interesting paper (Which is Open Access). Our intestinal bacteria might be responsible for human behavior we generally think of as mental rather than physical.

People with eating disorders (such as bulimia, anorexia) have circulating antibodies to a known human protein – α-melanocyte-stimulating hormone (α-MSH).

The levels of auto-antibodies to α-MSH correlate with severity of disease. α-MSH also influences anxiety and stress. And α-MSH is known to affect eating behavior, binding to important parts of the brain.

So, how do these auto-antibodies arise? One theory about all auto-antibodies is that they arise from exposure to external, such as bacterial, proteins. The body generates antibodies to these proteins that cross eact with self proteins in the person.

The authors did a database search for bacterial proteins, along with ones from viruses, fungi and archea, that had at least 5 consecutive amino acids in common with α-MSH.

They found a hit in ClpB – a heat-shock disaggregation chaperone protein – from the common gut bacteria Esherichia coli.

The authors showed that  anti-ClpB antibodies could be found in people with  eating disorders and that these antibodies crossreacted with α-MSH.

Their experiments in mice indicate that this protein may well be involved in weight loss. Antibodies that crossreacted with α-MSH could be raised  following exposure to purified ClpB..

These antibodies has an inhibitory effect on α-MSH activity. There was a decrease in the food intakes for mice  exposed to ClpB.

And they showed that the presence of E. coli in the guts of mice resulted in similar effects on eating behavior. The mice also developed anti-ClpB antibodies that crossreacted with α-MSH.

Yet mice with E. coli lacking the ClpB gene did not show eating behavior changes. And no auto-antibodies.

The extent of the effects in mice were often short-lived. While this could be due to differences in the murine and human immune systems, it suggests something more complex going on.

Thus, as science almost always does, there are more questions.

It is interesting that ClpB is a stress related protein for E. coli, helping deal with protein stability when the environment the bacteria is in comes under attack.

Because α-MSH is also related to stress and anxiety in humans.

Although such functional similarity might be coincidental, it may also suggest a phylogenetic link in development of coordinated responses to stress in bacteria and the mammalian host. Furthermore, such a link would implicate bacterial stress-activated proteins in the pathophysiology of stress-related diseases in humans

Proteins like ClpB are also found in a lot of other bacteria, so it may not be directly from E. coli the problems arise. In fact, several bacteria involved in intestinal disease such as Salmonella or Shigella may be more likely possibilities.

It makes some sense – someone has a bout of nausea, illness, diarrhea and vomiting from food poisoning, then develops antibodies that reinforce behavior that involves eating.

Examining other possible auto-antibodes that could be derived from exposure to intestinal flora and that affect eating problems sure seems like a nice place to spend a career.

Although such functional similarity might be coincidental, it may also suggest a phylogenetic link in development of coordinated responses to stress in bacteria and the mammalian host. Furthermore, such a link would implicate bacterial stress-activated proteins in the pathophysiology of stress-related diseases in humans