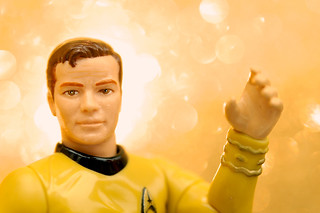 William Shatner’s Captain Kirk could be coming back to Star Trek. Speaking at Wizard World Nashville Comic Con, a typically laconic Shatner said that he’d recently received a call from J.J. Abrams regarding a role in the third Star Trek movie since the series was rebooted in 2009. Shatner said that discussions were preliminary at the moment and that any appearance would depend on what was done with his character, but that he would be “delighted” to return to Starfleet.

I thought the purpose of the reboot was to free the series from its history, allowing all new plots to bloom. Apparently not.

So we got a movie that was a mashup of the most successful Star Trek movie, without any real understanding of why that movie was successful. And now we see the tired trope of stunt casting for Captain Kirk. Just as we saw the stunt casting of Spock. Can the former Uhura, Sulu or Chekov be far behind?

As i have written before, the new producers have little real understanding of what made Star Trek so good to begin with. They continue to show that lack of understanding, destroying the uniqueness of a franchise even as they make millions.

I like William Shatner and do not begrudge him an acting gig. I just feel that the producers are again showing no real vision for the series and are falling back on cliches.

They got the name but not the narrative. Guardians of the Galaxy shows what happens when a science fiction narrative has heart.

Too bad Abrams’ Star Trek has none.