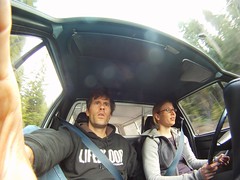 Over the past few months, General Motors and its Chevrolet dealerships have been selling the 2015 Corvette with an interesting feature called Valet Mode. Valet Mode records audio, video, and driving statistics of the person in the driver’s seat when the driver isn’t around, thus keeping low-life valets from being too loose with their filthy mitts while inside a Corvette owner’s fancy car.

Trouble is that in at least 12 states, using Valet Mode might be considered a felony.

Federal wiretapping laws generally require only one party to consent to a recording of an interaction. But in California, Connecticut, Delaware, Florida, Hawaii, Illinois, Louisiana, Maryland, Massachusetts, Montana, Nevada, New Hampshire, Oregon, Pennsylvania, and Washington, all parties are required to consent before a recording happens. So if a Corvette owner turns on Valet Mode in California and turns the car over to the unknowing attendant, that Corvette owner could be committing a felony.

This seems really stupid. The criminal laws simply have not caught up to reality. They have modified some of these when dealing with cameras in the public. But some things need to still be adjusted.

How about when a crook enters my house and is captured by my cameras? Am I the criminal because I did not get the permission of the criminal to record?

Could my friends get me jailed as a felon because I have security cameras around the house and they capture my friends stealing jewelry? They get off free (because the evidence is illegally obtained) and I go to jail?

Would that really hold up in court?

How is this different from a valet, entering my property and misappropriating it?

I could never be a lawyer.

One thought on “Valet mode and the law”