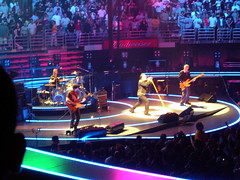 Apparently U2’s deal with Apple goes further than taking a bunch of cash and dumping unwanted music files on hundreds of millions of iTunes users. The band has said that it’s working on a brand new music formatthat “can’t be pirated.” Oh really? We’ve heard that before, many, many times. And every time someone claims that, whatever new DRM they created gets broken without hours. I imagine the same will be true of this. The format sounds like a rehash of other things that have been tried and failed before:

[The new format will be] an audiovisual interactive format for music that can’t be pirated and will bring back album artwork in the most powerful way, where you can play with the lyrics and get behind the songs when you’re sitting on the subway with your iPad or on these big flat screens. You can see photography like you’ve never seen it before.

Of course, we’ve been hearing this for years. Five years ago, the major labels were all going to team up to create “CMX”, a new music format that had all those audiovisual components. Where’s that now? Every few years we see startups claiming to have created a similar new music format that builds in all those audiovisual components… and no one cares. Is it possible that Apple with the help of U2 will suddenly figure it out? Sure. It’s possible. But I wouldn’t bet on it. Especially if it includes annoying DRM that no one wants.

First, I think U2 is involved because of Jimmy Iovine, who came with the Beats buyout. Iovine produced two of U2’s albums, both of which had lots of video adjuncts to them (Under a Blood Red Sky and Rattle and Hum).

I would not be surprised if all the U2 stuff – free album, etc. – is in lace to set up this new platform.

Platform? Because adding DRM to music or gussying it up with videos would not seem to be a moneymaker. Who pays for music?

Anything that can be digitized rapidly becomes free. Only those things that cannot be digitized seem to be open to making money off of.

Maybe that is what is going on here.

Speculation – couple this with the possible reason for buying Beats – creating a platform that permits musicians to support communities for their work. The work itself becomes free but the communities can directly support the music, without the need for middle men.

Jimmy Iovine sees the opportunity in changing the game and “building a communication between a fan and an artist.” In other words Beats Music is not yet another streaming service designed to sell music, but a platform for artists to build businesses and “sell everything but music” as Troy Carter says.

It makes the interesting comparison to Uber – which is disrupting taxi service in major cities:

In essence, Beats aims to become Uber of music by aggregating demand, connecting listeners to artists and empowering the artists to build thriving business on top of the platform. Much like Uber, which promises to end the era of poorly paid cab drivers. Or like Apple App Store, which connects users with app developers allowing them to build business on top of the platform.

The disintermediation of industries – the connection of creator and customer without intervening entities – is one of the main disruptors affecting many companies. Here it is being applied to the music industry.

The point of the article is that today, music is not really sold. It sells other things, whether they are concerts for the musicians or headphones they endorse. Business models based on selling music are doomed.The key is making it easy for the fans to find the acts they like and support them.

The strategy lesson from Apple and Beats is this: Look for opportunities to build platforms connecting consumers with value-adding complementors. (Think a “connect-ing business”, and not a “connected business”.) Capture value through bundling with the platform that will buy you hyper-growth driven by network effects and insurmountable competitive advantage. (And of course don’t tell anybody what’s you are up to before it’s ready.)

They would want to make it easy to connect fans and musicians, making it possible for communities to easily support one another.

We already saw Apple make an aborted attempt at social music communities with Ping. It is obviously something they are interested in. The guys behind Beats seem to get this and might be able to help Apple create something actually useful.

With U2 as their first test case. We shall see.