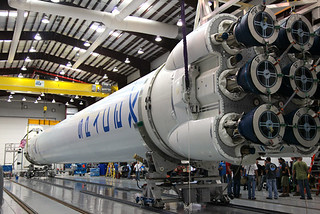 NASA plans to award a much-anticipated, multibillion-dollar contract to ferry astronauts to the International Space Station to both Boeing and SpaceX, according a person familiar with the process.

Boeing and SpaceX both have capsules that NASA wants to continue to be developed  for its use. Boeing is the orld guard, cost-plus contractor, while SPaceX is the new nimble one.

Boeing is a safe choice. SpaceX is likely much less expensive. So this is a good use of America’s money.

The interesting thing is the rocket that would be used to get the capsules into low Earth orbit. SPaceX builds its own rockets. keeping costs down.

Boeing, along with Lockheed, created ULA to provide the rockets, using an Atlas model. But at the moment, the engine comes from Russia, which seems very stupid.

So ULA has apparently contratcted with Blue Origin to design a new engine.