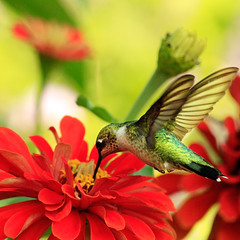 Dinosaurs lost the ability to taste sugar; hummingbirds re-evolved it
[Via Ars Technica]

Chickens are not fussy eaters. Any object resembling food is worth an exploratory peck. But give a chicken the choice between sugary sweets and seeds, and they will pick the grains every time. This is odd. Many animals, including our own sugar-mad species, salivate for sugar because it is the flavor of foods rich in energy. New research suggests that many birds’ lack of interest in sugar is the result of genes inherited from their dinosaur ancestors.

Most vertebrates experience sweet taste because they possess a family of genes called T1Rs. The pairing of T1R1 and T1R3 detects amino acids and gives rise to the savoury “umami” taste, while the T1R2-T1R3 pair detects sugars, giving us our sweet tooth.

Maude Baldwin, a postgraduate student at Harvard University, searched the genomes of ten species of birds, from chickens to flycatchers. She found that insectivorous and grain-eating birds possess the gene pair that detects the amino acids present in insects and seeds, but none of them had the T1R2 gene responsible for the ability to taste sugar. These modern birds evolved from carnivorous theropod dinosaurs that had diets that were rich in proteins and amino acids, but lacked sugar. So Baldwin reasoned that without a need to detect sweetness, ancient birds lost their T1R2 gene.

Birds lack the receptors to detect sweets, apparently inherited from their dinosaur predecessors.

So how do hummingbirds taste the sugars that they eat exclusively? urns out that they did not    regain this by reactiviating the old genes. Those are dead and gone.

They took the genes that were present, that normally detected proteins. These genes are mutated in hummingbirds to now detect sugar.

This is seen a lot: once a function is lost, it is regained only by adapting a current gene, not by reforming the old  one.