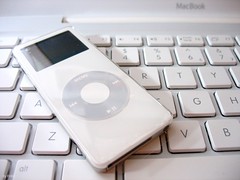 The classic iPod is dead. 13 years ago people thought it would flop.
[Via Vox – All]

Apple has quietly killed off the classic iPod after a 13-year run. You can still buy music players with the iPod branding — Touch, Nano or Shuffle — but you can no longer buy a device from Apple that sports the famous iPod clickwheel.

The classic iPod had a built-in hard drive that’s bulky and prone to failure. Newer Apple products — including the Nano, Shuffle, and iPhone — are based on flash memory that’s smaller and more reliable — but more expensive per bit. But as the price of flash storage has fallen, the advantages of a hard drive-based music player have dwindled. It’s probably not a coincidence that Apple killed off the classic iPod the same week it introduced the first iPhone with 128 GB of storage.

Not unexpected but a little sad to say goodbye to the click wheel.