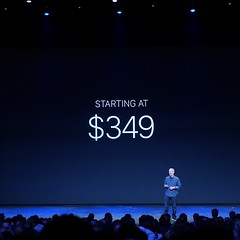 The Moto 360 is too aggressive. It’s too big. It’s too shiny. Its face is too large in comparison to its bezel. Its strap flops out from the edge of its case like a dog’s tongue on a hot day. That’s my opinion. Many will disagree with me, but I don’t care. I will never wear a Moto 360. I might wear an Apple Watch, though. I expect millions of others might too.

Let’s get one thing out of the way: the Apple Watch is not a pretty watch. A bulbous slab of metal, its case is a chunky blob with a square face and bulging sides. But while not conventionally attractive, it does achieve one extremely important goal: anonymity. However big it may be, the soft lines of the case seem to almost fade into insignificance, shifting focus to the strap…

I really like the new watch. I think it hits many of the necessary things I’d like to see in a smart watch 1.0.

One key aspect of timepieces that I expect smart watches to change – a smart watch will not be seen mainly as jewelry, as almost every modern watch is viewed. It will provide so much more usefulness than that.

Sure individualization will be important but as this tech matures, the usefulness will become more important, just as the computational usefulness of smartphones have come to dominate their phone calling aspects.

We are seeing some nice starts but I really see the smart watch as a useful adjunct mainly using the computational power of the mobile supercomputer we will carry in our pocket. You will need both.

What I liked about the Apple watch was one important aspect I had not seen done as well yet on other watches – it is for glancing more than looking at. That is, we just glance at the data, not interact deeply with it.

No need to even glance. I’ll be able to pay  for clothes or open my hotel room with a simple motion. Control my TV streaming. Check in for an airplane trip.

The health and fitness stuff is not compelling yet but may well be in version 2 or 3. People forget that the original iPhone, while amazing, had many people think it was stupid and worthless. It did not become compelling until the 3G – a year after introduction.

I expect that this might be similar. I expect things to open up a lot as people change their view of what a watch can do, just as they changed what they think a phone should do.

But it will only be of interest to those who already have an iPhone since one is required. I see smart watches for either Android or iOS to drive more hardware lock-in. And it will only be a subset of iPhone users who may buy one, so I do not see them penetrating as far as iPhones.

I could be wrong though.

Of course, cell phone companies are already advertising an iPhone 6 for free with a 2 year contract and your old phone. So I expect some deals may make an Apple Watch a more interesting prospect.

But if Android is your favorite, I do not expect the Apple Watch to change your mind.