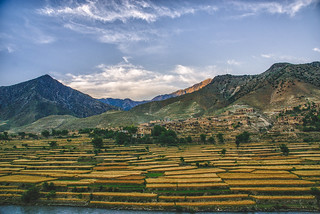 Absurd in Afghanistan
[Via The AmCon » Articles]

Five American troops moved briskly through the streets of Kandahar, their weapons at the ready. It was not yet mid-morning, and things had already broken down. Separated from their convoy, they were following an Afghan prosecutor to the city’s judicial headquarters. Afghanistan is generally not kind to foot patrols or improvisation, and that July morning in 2011 was quickly acquiring an aura of misadventure. Their mission was to kiss the ring of an Afghan judge to obtain the release of a young boy who had been arrested for no other reason than that a police chief found him attractive. Joseph, one of the Americans from that patrol, later explained that it was a uniquely Afghan problem requiring a uniquely American solution: “Begging for a favor while carrying a gun.”

While in police custody, the boy would be dressed in girl’s clothing, made to dance suggestively, and then sexually abused in a ritual practice known as bacha bazi (literally, “playing with boys”). The community had come to the U.S. battalion commander, pleading with him to intervene and secure the boy’s release.

“The commander was a rising star who’d spent months building schools and digging wells to win the loyalty of the village,” Joseph recalls. “He gathered us in a room. Everyone knew the stakes. We were risking our lives. He was risking his career. A firefight on an unauthorized mission in another regiment’s battle space is a quick route to early retirement.” A firefight on a crowded street where the enemies are indistinguishable from civilians would be a quick to route to the front page of the New York Times—and a court-martial.

“This is the tribalism of Afghanistan,” he says. “There is no public consensus on how to act in any situation. Everything is personal. That’s what ‘tribal’ means—it focuses on who is involved: Ask this guy to do you a favor to help you with that guy. Everything is about relationships and demonstrations of power. Who can protect you? Who can pull strings to deliver a favor? Every soldier in Khost and Zhari and Nangahar knows this.”

Joseph—whose full name is being withheld due to his ongoing affiliation with the military—had virtually no combat training prior to his arrival on the streets of Kandahar, but he was more seasoned than most of the soldiers around him. After a classical education at elite schools, his early career on Wall Street was followed by law school, JAG, and then Afghanistan. By the time he arrived, he was in his late 30s—the same age as British novelist Evelyn Waugh when he saw combat in World War II, and every bit as unlikely a soldier. Over an espresso in a Washington, D.C., suburb in the autumn of 2011, I begin a conversation with Joseph that continues off and on for three years, in which he reflects on the military’s helplessness in the face of violence and absurdity, particularly the violence of that July morning at the hands of America’s allies.

“We lacked the confidence even to say, ‘You may not rape little boys.’ All we had to offer was administration and technology, and they sensed this.”

Joseph believes that, in a peculiar way, this parallels America’s institutional system. “We have no consensus either. Nobody can agree on any normative reason to do anything,” he says. “So we default to an institutional structure. Our tribalism is institutional. Afghanistan was an encounter between these two systems. The first lieutenant leading a foot patrol stands square at the pressure point between these two tribal systems: one fluid, personal and violent; the other rigid, impersonal and violent. A quarter mile away from any soldier is a guy in a grape hut who wants to cut his head off. Nine thousand miles away is a guy in an air-conditioned room with video screens contemplating his pension who wants to drop a bomb on the guy in the grape hut.”

An intriguing discussion. I think it hits some important points – especially about America being in a place where normative behavior is in transition, thus allowing institutional systems to dominate.

We have no consensus because the world is changing too rapidly. America’s historical balance between hierarchical authority and distributed democracy has been put under a lot of stress trying to respond.

Democracy, while often eventually providing the wise solution, usually takes a long time to respond. This has allowed the institutional aspects of authority to dominate. Because authority really only exists by taking actions.

So when we go to a country with no real unifying culture, one where distributed approaches extend so far that authority changes by the minute, we have balance to offer.

Authority is blind to the complexity of these problems – often sub-nation state in size. Afghanistan is all sub-nation state tribes. It would be a difficult nut to crack even if we did understand  and could bring the balance needed.

Authority wants to fight the old battles, ones it knows how to win, ones involving national governments, laws, justice and culture. That is not going to happen.

These battles will not involve lines on a map.

Because we mostly won that battle. Most nation-states today want to see the benefits of a balanced government,  one with strong authority and democracy. In the early 70s, there were only 40 democracies in the world. By 2000 there wee 120. Roughly 60% of the countries today are democracies.

Authority wants to keep fighting that battle, a war between nation-states. Distributed democracy sees the problems but keeps talking about possible solutions, not accomplishing any of them.

This is the battle of this generation – seen at all sub-nation state levels, even at the state and local levels here: Finding the balance between the actions of hierarchical authority and the wisdom of distributed democracy.

We are slowly finding it.

[corrected title. Know I should not write that late at night ;-)