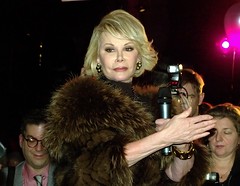 Some great examples of her wit and comedic daring in the NYT’s obituary:

On her husband’s suicide: “After Edgar killed himself, I went out to dinner with Melissa. I looked at the menu and said, ‘If Daddy were here to see these prices, he’d kill himself all over again.’”

I was not always a fan of her humor but she pioneered several things – late night talk show with a woman host and changing the Red Carper forever.

I had gotten hooked on Fashion Police  – where it was always fun watching an 81 year old woman say stuff that no one younger could come close to – often to see the reactions of her quests.

But it was the graciousness with which she treated those guests during an interview. I got to see many stars. models, singers as people, who were actually very interesting and talented people, not just stuck-up  celebs pushing a book.

It was this ability to show the human aspect of a person that made me love Joan, not the harshness of her humor. And I got the idea that many of the stars she roasted deserved it because they WERE stuck-up celebs.

So sad she will not be there on Fridays anymore.