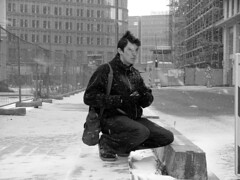 As the Ferguson protests made exceedingly clear, citizen journalism is both a blessing and a curse; while it can expose police brutality and censorship, it’s also prone to misinformation. But how do you illustrate the complexity of the subject for the general public? If you’re developer Nicky Case, who has a history of tackling difficult subjects, you build a gamearound it. His as yet unnamed title will have your character trying to gain Twitter followers (that is, score points) by taking photos at controversial events like protests. The trick will be to accurately capture what’s happening without polarizing any group more than necessary. You may want to photograph police corruption, but the cops could block you from certain areas if you antagonize them too quickly; at the same time, you don’t want to take extreme shots that turn peaceful protests into riots.

An interesting approach. Actully put players into a complex situation and let them try and figure out what the best approach is.

“How you frame the story, will change the story.”

It looks to be quite an undertaking and may never see the light of day. but distributed approaches allow him to try.