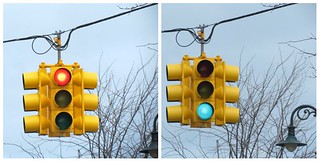 Taking over a city’s intersections and making all the lights green to cause chaos is a pretty bog-standard Evil Techno Bad Guy tactic on TV and in movies, but according to a research team at the University of Michigan, doing it in real life is within the realm of anyone with a laptop and the right kind of radio. In a paper published this month, the researchers describe how they very simply and very quickly seized control of an entire system of almost 100 intersections in an unnamed Michigan city from a single ingress point.

Nodes in the traffic light network are connected in a tree-topology IP network, all on the same subnet.
Halderman et al., University of Michigan

This was the line that really got my attention:

The 5.8GHz network has no password and uses no encryption; with a proper radio in hand, joining is trivial.

An important network like this, one where someone could cause huge problems by disrupting, and there is an open network and no password. And there is no encryption of communications.

And then system defaults that leave a backdoor open.

Someone could disable stoplights faster than they could be repaired.

And what is the industry’s response? It has “followed the accepted industry standard and it is that standard which does not include security.”