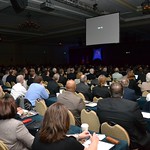 Scientific conferences, the too-slow movement of ideas, and giving an engaging talk
[Via Small Pond Science]

I went to a bunch of scientific conferences this summer. Four of ‘em. I have a smorgasbord of reflections on the whole experience to share with you.

Yes, this is a lot of travel.

Very accurate description of science conferences. They should be places for rapid exchange of information.

But too often they are simply places for a bunch of white men to hang out.

Far too many talks are like every other. And many have little relevance to anyone else. The same information could have been exchanged by telephone.

I suspect this is self-evident to anybody that’s been in science for a few years. We might be studying animals or plants or microbes or rocks, but science is still a human enterprise. The indicator of a good talk — especially for a junior scientist who needs to get and stay employed — is the fact that the talk was impressive. If you had to choose between giving people the impression that: A) you’re an awesome scientist, or B) a particular scientific idea

Yep, way too many speakers simply do a data dump to show the crowd how hard they have been working, to awe the crowd.

“60 slides in 15 minutes. That’ll do the trick.They will be awed by how hard we have worked!”

Now I have seen the masters of this approach,who also managed to get across big ideas also. In pre-digital days. Lee Hood would have two separate projectors going on two screens at the same time – sometimes popping back and forth between them, other times leaving one slide up for a long time as he discussed another, seldom looking at the screens , never appearing to read from notes and always on point with the idea.

He did not need 60 slides to awe us. I’d look in awe at just ONE slide that I knew represented perhaps 10 graduate student years. On one freaking slide! And he has tens of these slides.

You had to bow down to the awesomeness of Lee Hood and his lab. But he was also providing tremendous ideas with the data – at that time about how the tremendous antibody repertoire we all have came to be.

Later with sequencing the human genome.

He is still pursuing big ideas – P4 medicine just the latest. But he has had to bow to technology and only uses a single projector these days.

The talks I always have remembered, that had an impact on my research and whose speakers I sought out were the ones that said. “Here is a great idea. We do not have it all figured out but here is some interesting data. Anyone one have any other ideas?”

Hearing how someone has been successful with a project is useful but we can read the papers about that. Describing an interesting phenomenon that has no full explanation is always more interesting to me

And more universal, as all scientists run into problems and have to figure out how to move forward.

Make it magical, with dark corners of unknown wealth, that could hold tremendous riches if we illuminate them.

Rather than a clean, sterile progression  from point A to point B.

2 thoughts on “Science conferences – too often mundane rather than magical”