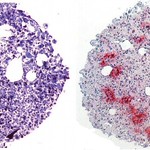 Today, I wanted to show someone a PDF of a paper of mine that I co-authored in 1999.  The paper was, I think, kind of cool.  It reported the sequencing and analysis of the genome of Deinococcus radiodurans, an incredibly radiation resistant bacterium.  Alas, I did not have a copy on me, and the only electornic device I had with me was my phone.  The person I wanted to show the paper to had their computer, a device with a strange little red trackball and running some sort of Windows operating system, so I looked at it and panicked and said “Maybe you should drive” (as in, maybe they should be the one controlling the computer).

So this person, who shall remain anonymous mostly because of the ancientness of their computer, did the kind of obvious thing, and opened a web browser (don’t even ask which one) and typed in “Pubmed.Com”.  OK – that would work.  I might have preferred going to Google Scholar, but I use Pubmed about as frequently.  And though I do not have a Windows machine or the weird web broswser they used, I have recreated what happened next.

In order to read a 15 year old paper, he had to spend an hour, giving up all sorts  of information and rights, open himself up to spamming emails and generally giving over all sorts of information.

This is what I hate about so many close, for-profit journals – they continue to charge or to make money off of works that are really ancient.

I agree with Jonathan – I’ll never publish in any journal that does not open access all papers after 12 months.