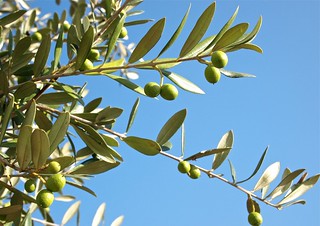 Southwest Spain is experiencing its worst drought since record keeping began 150 years ago, and agricultural crops, especially olives, are suffering badly. With climate models and Spanish researchers both predicting that Spain’s droughts will get more intense and more regular than before, this is the second year since 2012 that heat and drought have threatened the country’s trademark olive harvest.

Spain produces around half the world’s olives and is the number one producer of olive oil. The drought has speculators, including forecasting agency Oil World, worried that olive yield could drop up to 40 percent year-over-year in 2014. Olive trees flower and start to bear fruit in the late spring and early summer which was an especially dry time in Spain’s main olive-producing regions this year.

“The drought in Spain and its impact on the olive market is potentially very significant,” Lamine Lahouasnia, head of packaged food at Euromonitor International, told the Wall Street Journal. “If the drought does end up adversely affecting Spanish yields, it is very likely that we’ll see rising consumer prices in 2014.”

European olive oil prices are already up over 30 percent since the beginning of the year, a phenomenon driven by above average temperatures and low precipitation across the Mediterranean olive-growing belt. According to the IPCC, the Mediterranean may be one of the most impacted areas of the world from climate change. Already a hot, semi-arid region, hotter summers and more intense and frequent droughts will threaten water supplies and agricultural production.

It may sound minor but this will happen more and more.

Climate change will severely disrupt agriculture in many countries. Places that got a lot of water will no longer. Other places will get too much.

Changing the lives of billions.