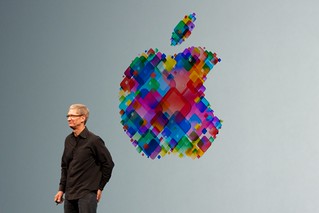 Quiet day in blogland. Here’s something to kick around for those of you who are so inclined:

Shareholder vs. Stakeholder Capitalism: …We may be witnessing the beginning of a return to a form of capitalism that was taken for granted in America sixty years ago. …

Are we witnessing the reemergence of “Stakeholder Capitalism”? I’m doubtful.

I’m not. Let’s look at one of the 21st century corporations that recognizes stakeholders, not shareholders – Apple.

At this year’s annual meeting, Tim Cook was visibly angered by the questions from a climate change denier group. They wanted to know if Apple’s investments in controlling the environmental  impacts of its business helped or hurt the bottom line. They wanted him to commit only to things that made money. Period.

Cook does not get angry in public much. But he knows the value of using it when necessary.

He stated that Apple tries to do what is right and just, to not focus purely on the return on investment (ROI) of what they do.

When we work on making our devices accessible by the blind,” he said, “I don’t consider the bloody ROI.

Then  he said something I have never heard a CEO state, one that the sociopathic leaders of shareholder-driven corporations would never even think:

If you want me to do things only for ROI reasons, you should get out of this stock.

That “ anything else” used to encompass a lot.There used to be a multitude of stakeholders a corporation needed to serve – shareholders, employees, customers, suppliers, lenders, and the local community.

For much of the last 25 years, the only stakeholder a corporation focussed on is the shareholder.

It is the Costco model vs the Walmart model. One posits that corporations are run by the sort of moral and ethical people that Adam Smith described. People like Tim Cook.

The other envisions a corporation run by sociopaths. One that ignores its necessary impact on employees, suppliers, lenders and the community.

It ignores its social obligations.

Capitalism only works because of its social connections and norms. It cannot work by itself. It cannot exist in isolation. It is a social construct. It needs people who will participate.

And people are learning the power of that participation more and more to control the social behavior of a corporation.

Apple has always been focussed on much more than its shareholders (one reason Wall Street has never treated Apple well). That is one reason it has such a dynamic community of fans.

The sociopaths tried to convince us that their path was the right one because it would raise up everyone. We have seen that this is not the case and people are beginning to use their power to make companies serve the public more.

It will increase and perhaps we will again return to the stakeholder view of capitalism.

Some  corporations and CEOs may not be as wealthy but society as a whole will be.