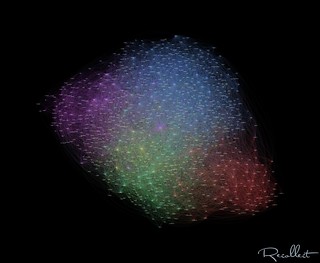 How groupthink gets reality backward
[Via Boing Boing]

In his new book, David McRaney explains that You Are Now Less Dumb. Here he makes you even less dumb, by way of explaining social norms you will no longer be defeated by. Read the rest

Worth looking at. It helps explain some of the network material I’ve been developing.

Humans are social animals and HAVE to maintain social contacts. Most people make those contacts by having many strong ones within a small number of groups. Others have many weak links to a large number of groups.

Studies have shown that a majority of people in a group connect strongly to others in the group and are highly pushed top conform to the group’s norms.

Others tend to be  disruptive early adopters who have weak links to many other groups, so the pressure of any one group is weaker. They are not as susceptible to any one group’s norms

But this then tends to make them unloved by any particular group because they are not seen as one of the team. They bring in outside ideas and norms that are not from the group.

They are disruptive. No one likes them.

So, being an early adopter myself, I kept reading this article saying “I don’t do that.” or “That is not how I would do it.” It felt like reading a study on some weird primate instead of other humans.

It was a weird feeling.

But what technology allows us to do today, and what the article states we should do, is this: it allows anyone to make a weak connection to someone from outside the group. Now even the majority can begin to make links and find new norms, without having to be disrupted.

They can do it diectly. This will change culture in important ways.