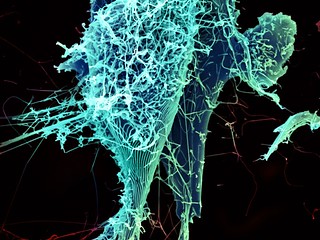 There is a cure for Ebola, we have it, we just don’t let anyone use it.
[Via Greg Laden’s Blog]

I had suspected this might be the case. Disease like Ebola are potentially easily cured using serum. Here’s the idea. Someone gets the disease and survives, and their body now produces products that give them an immunity. So, you take a bunch of their blood, clean it up as best you can, and inject the serum (the cleaned up blood, to oversimplify) with these immune products, in to a person with the disease. That stops the disease, at least some of the time. The early history of the discovery of many nasty viruses involves several stories like this, where a researcher or physician is infected, seemingly likely to die, and is given a serum and lives.

I had also thought this might be why the two Americans were returned – we had a novel treatment. It worked in monkeys. It had just never been used in humans.

It uses something we have known about for a very long time – passive immunity. It has helped people infected with a disease until their own immune system can generate the needed protection.

But it is not rocket science – the serum from mice that have been injected with specific Ebola proteins produce antibodies. When those antibodies are injected into the blood stream of those infected with Ebola, clean up the Ebola virus until the person;s own immune system could produce its own antibodies.

This has been used for rabies exposure for years.Now we may see it used for Ebola.

We have the tools to deal with Ebola. It just costs money. For a disease that affected a few hundred every couple of years, there was little ability to recoup any costs to produce it.

Now, as Gred says, perhaps the US government will step in and pay for the needed work to produce this treatment.