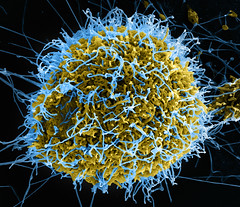 Usually these outbreaks burn  out rapidly because people die quickly. But the mortality rate has dropped from 90% in previous epidemics to 50%.

This now means there is more opportunity for the virus to spread. This loss in virulence is actually what happens with many viruses.

There is a selective advantage for a virus not to kill. Sustaining itself is helped by spreading to others and the most successful viruses are those that do not kill, or kill very slowly. They spread even further.

A ‘hot’ virus like Ebola is under selective pressure to become less deadly, even as the pressure selects for those that spread more easily.

The variants that are less likely to kill will spread further. So, as time goes on, a balance is reached between the virulence of the disease (as well as how many it kills) and how far it can spread. That is, morbidity rates can increase as mortality rates decrease.

At 90% mortality, people die too quickly for the disease to spread. But at 50%, there are greater avenues for spread. Especially since in this outbreak the virus seems to spread by more than just blood-to-blood contact as most of the previous outbreaks saw.

So, in one way the current outbreak indicates that Ebola may be becoming less dangerous, even as it kills more people.  And thus potentially more dangerous. It now becomes much easier for an infected person to get on a plane and send the disease elsewhere.

And that is the really horrible effect, because now it has the ability to disrupt huge swaths of human civilization. The virus is found in fluids, even after death. So funerals are now places for transmission.

How cultures have dealt with death is now being disrupted. This will have social effects for a long time.

Although hard to read, this report from a doctor that was there is both heart-waring and heart-rending.