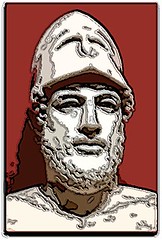 There Will Be No Smooth Sailing
[Via Booman Tribune]

In the next couple of decades, America is going to have to grapple with two major changes. The first is that there are going to be new first-world powers, like China, Brazil and India, that we will have to reckon with. The West will not be driving things the way we have been accustomed to since the end of World War Two.

The second is that the American electorate is going to be more diverse and left-leaning, more like Europe.

In both cases, Hillary Clinton seems ill-suited to be our leader. The future is more Bill de Blasio than Andrew Cuomo, and the Clintons probably don’t get that. Still, Andrew Sullivan’s dripping contempt of the Clintons is irritating. He opposes them for all the wrong reasons and none of the right ones.

While I think the Clintons are a bit “out of time,” I don’t necessarily think this is a terrible thing for a country that is going to have some serious difficulties adjusting to new realities. Clinton could serve as a bit of a buffer, allowing the country to adjust to the changed world in way that doesn’t put too much shock into the system.

We should not underestimate the threat that the reactionary rebellion against change represents in this country. They are on the verge of defeat, they know it, and they aren’t going to take it lying down.

I have not disagreed with a post I agree with quite this much in a long time.

I do not think that we will have to worry about the BRIC countries quite as much as others. In a battle between diverse, distributed bottom up approaches and single-minded, authoritarian, top down ones, no country in history can compare to the US. Two of the BRIC countries (Russian and China) are highly authoritarian and the other two, while diverse, do not have a long history of effectively dealing with that diversity.

The BRIC countries will be important, and Western influence may drop (I actually feel it may increase in some ways), I do not think the threat of BRIC will really impact the US. I think it is other. smaller pressures that will have a huge effect.

He hits one of these in the 2nd problem – diverse populations. One of the aspects of a successful society in the current age is solving complex problems, using a wide and diverse set of views to arrive at the best win-win solution.

We may become more diverse and left-leaning but not at all like Europe. Europe still has too little diversity and is having a very hard time adapting. The US while obviously showing signs of stress, has a long and successful history of dealing with new and diverse immigrants, integrating them into the most diverse culture ever.

And America has historically balanced this with an authoritative individualism that allows us to do things well, once we make the decision. Or decide to change what we are doing when conditions change. A decision that is almost always based on the democratic principles we were founded on.

Our culture is an amalgam of every other culture. It is one reason Hollywood movies do so well overseas (in fact, many movies can only make a profit by making a lot of money in a wide variety of countries). Our culture is a world culture.

No one else comes close. It is why I am confident humanity will solve our problems. We already have the beginnings of the culture that will lead us to success. It is America’s.

Not because we have some God-given manifest destiny. No top down authority makes us the model. It is due mainly to one thing.

Balance. Between distributed democracy and hierarchical authority. Those have helped make America as successful as it is. They will help even more in the future.

I do think Hillary may not be suitable for the next President. I actually think she would be better suited on the Supreme Court but that’s another story. But at the moment, there are no other  viable choices for continuing our transition.

Because, while I talk historically  presently the US is out of balance, with top-down, elites having too much political and economic power And as has happened others times this occurred, we are beginning to see the democratic processes re-balance the system,

Those in favor of the status quo, the reactionaries, the ones who want to maintain the concentrated power they wield, will not give up power easily or without loss.

This will simply drive people to use distributed approaches to find solutions. The barriers to entry for much of this are so low that authority simply has a hard time stopping it.

As a quick instance, war zone reporting used to be highly restricted, with authorities only allowing certain things to be printed. Now everyone has a camera on them almost all the time, with the ability to disperse information in ways that have never been allowed before. Both for good and ill.

Finally, a key aspect to remember. Reactionaries here are not strictly conservatives. There are many liberals who want to maintain the status quo. The battle is not along economic lines – as our political parties are drawn up. It is along a separate axis.

We have already seen this beginning to arise in our political leaders (whose votes have recently begun to reflect the battles going on).

As with any struggle, there will be setbacks and such. But, historically, the societies that did best at balancing hierarchical authority and distributed democracy were the most successful (Cordoba in the  900s vs Cordoba 150 years later; Venice in the 1300s vs Venice. 100 years later). The democracy of Athens still informs us, not the authority of Sparta.

Too much of the latter and a society is brittle and unable to adapt, ruled by an authoritative elite that extracts wealth for their own aggrandizement  Too much the latter and nothing gets done, as everyone talks about the problem.

But balance the two and you have the ability to adapt, to find radical solutions and then execute them.

I see nothing yet to believe that America will not find the balance needed to produce solutions in this battle, and then help the rest of the world. That is also what we have done before.