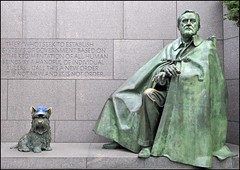 New NYT: Obama and the myth of presidential control
[Via Brendan Nyhan]

From my new Upshot column:

One of the most common criticisms of presidents – especially struggling ones during their second term – is that they have lost control of events.

This charge, which has been leveled at chief executives such as Ronald Reagan and George W. Bush, has become a mantra lately in coverage of President Obama, who faces a stalled legislative agenda and crises in Ukraine, Gaza and at the border with Mexico.

What happened? One frequent explanation from pundits and journalists is that Mr. Obama has “little control” and is instead being “driven” or “buffeted” by events.

This notion pervades commentary and debate on the presidency.

I would tend to agree with this. We put too much focus on the President as though he was some sort of monarch. It is not true when things are happening. Hindsight lets us believe the President  was in charge of some things when he often was not.

FDR only got control of WW2 after the Japanese attacked Pearl Harbor. He tried all sorts of things to move us closer to joining the war before but was unable to accomplish our entry simply by himself.

Kennedy succeeded with the Cuban Missile crisis not purely with a direct show of military might (we had plans to wipe out the military bases almost overnight). He was vastly supported by the soft power of Adlai Stevenson’s private presentation and the United Nation’s secret negotiations.

Reagan only needed to say “Tear down this wall”. The people in Germany made it happen, but probably not because Reagan had any direct control. That is the soft power of a President.

It is often the indirect actions, sometimes in secret, of a President, not the ones he takes direct control of, that have the greatest impact.

During an administration, we often bemoan the inability of the President to do anything. But we only seem to recognize what a President “does’” twenty years later.

Few have the ability to see it at the time.