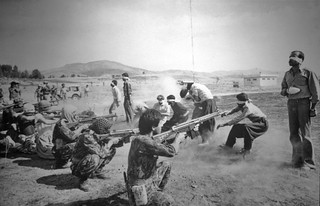 An execution in Arizona turned torturous yesterday, with convicted murderer Joseph Wood taking almost two hours to die after he was injected with a secret mixture of drugs.

Nothing demonstrates the authority of the state than putting to death its members. Here we again see a botched execution done without humane considerations.  Almost 2 hours to die, gasping all the time.

Once again an unknown mixture of drugs was used that failed to produce the ‘clean’ death the state wanted.

It is simply experimenting on a prisoner. Lethal experiments.

No one knows what he was injected with. The authorities did not want his lawyers to get a blood sample, even after a judge ordered them to. Companies do not want to be associated with human executions because social norms in many areas will provoke an unwanted response.

So the authorities cannot get the ‘good’ drugs from sources beholden to consumers.. Thus they try and protect their sources by keeping them secret.

Firing squads would be more effective and more humane. authorityDead in a minute.

If there is a humane way for the state to put someone to death. Considering how often they have killed innocent people maybe they should not be allowed to at all.