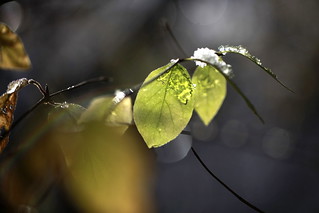 Are the people who refuse to accept climate change ill-informed?
[Via Ars Technica]

Polls relating to publicly controversial scientific issues often trigger a great wailing and gnashing of teeth from science advocates. When large proportions of a population seem poorly informed about evolution, climate change, or genetically modified foods, the usual response is to bemoan the state of science literacy. It can seem obvious that many people don’t understand the science of evolution, for example—or the scientific method, generally—and that opinions would change if only we could educate them.

Research has shown, unfortunately, it’s not that simple. Ars has previously covered Yale Professor Dan Kahan’s research into what he calls “cultural cognition,” and the idea goes like this: public opinion on these topics is fundamentally tied to cultural identities rather than assessment of scientific evidence. In other words, rather than evaluate the science, people form opinions based on what they think people with a similar background believe.

That shouldn’t come as a shock, especially given the well-known political or religious divides apparent for climate change and evolution.

Cultural cognition * – “public opinion on these topics is fundamentally tied to cultural identities rather than assessment of scientific evidence. In other words, rather than evaluate the science, people form opinions based on what they think people with a similar background believe.”

People are quite willing to ignore facts all the time. It can be a good thing. We ignore the fact that we will die in order to make living easier.

It is what keeps a Cubs fan optimistic that this year they will win it all.

This all fits into how human communities adapt to change. Most people will not change what they are doing unless told to by a community leader. They follow a hierarchical authoritarian model – they do not have to know everything as long as they can trust their leaders to tell them the right thing to do.

This approach can be very powerful when the leaders have a good idea of how to solve a relatively simply problem that affects small numbers of people. It can get things done quickly. At least at first.

It falls apart when dealing with complex problems affecting millions. Information flow slows. No single hierarchy can see the entire problem. No one authority can solve it.

Then the emperor is revealed to have no clothes. Those following an authoritarian model will continue to state he does have clothes on and they are beautiful.

Luckily humans also have another approach, one using distributed social networks to foster rapid information flow through the demos. It is through democratic processes in a distributed network that we can begin to deal with very complex problems.

We need to synthesize data across multiple communities to get a better picture of, say, the emperor. An adaptive, distributed approach will see that he is naked and take action accordingly.

A synthetic, distributed approach across multiple communities must be used to provide all the information needed. And turn that information into the knowledge needed to take action.

And that is why I continue to be disappointed in the inability of people, mainly conservatives, to provide their voices in solving this problem.

We need all our heads involved, including conservative minds.

But the inability to adapt cultural cognition, to continue to follow the clothes-less emperor, still seems to drive the minds of their leaders. It is closing their communities off more and more from an accurate view of the world around us.

Even as the military adapts. And insurance companies. Two communities grounded in hierarchical authority (anyone who has dealt with either knows this) that realise they need to adapt.

So it is possible to adapt. It makes one wonder what is preventing the political leaders who refuse to acknowledge climate change. Surely not national security. Nor deadly catastrophes.

*One of the things I enjoy with Ars – whenever they have a climate change post, you can guarantee there will be interesting comments, even from those who do not acknowledge the topic. Not necessarily nice or even intelligent but some interesting ones. Seven pages of comments! And I bet not one opinion changed. That is the cultural identity of those at this site. As it is at many websites who create their own cultures.