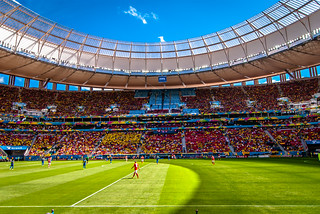 How to predict news events with 100% success
[Via Boing Boing]

This scam was just done on Twitter with the game between Argentina and Germany. They not only predicted the correct score but also who would score the goal and when it would occur. It went viral.

Luckily the perpetrator made a mistake and did not keep all their handiwork private.

The author of this article uses another example – a youtube video predicting a presidential election. The YouTube video has a time stamp that is from 6 months before the election. It states the exact results and links to Instagram, Flickr and Twitter accounts –  all also timestamped from before the election, that accurately show the correct results, state by state.

So the election was pre-ordained, a kabuki created by the corporations?

How this is done is to create private accounts months ahead of time for every possible combination, then delete all the incorrect accounts and make the correct one public.

Easy to do with a little programming skill.

So watch out for those who predict the Emmy winners, election results or World Series champions, after the fact.