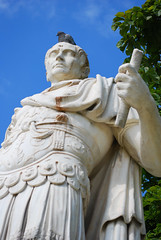 There’s no denying that the process of giving birth is an unforgettable experience for those involved but now it seems the labor of love could also be important for programming an infants development. Researchers from the Karolinska Institutet (Sweden) drop some knowledge about the mechanosensitive nature of DNA methylation and show that birth via Caesarean Section (CS) skips the profiles established in blood (hematopoietic) stem cells during labor.

Author Mikael Norman shares that “During a vaginal delivery, the fetus is exposed to an increased level of stress, which in a positive way will prepare the unborn baby for life outside the uterus. This activation of the fetus’ defense systems doesn’t occur when a cesarean section is performed before labor begins, which in turn could be a possible cause for the noticed differences between the groups.” So, when it comes down to it, this report suggests that vaginal birth helps give babies an epigenetically programmed ‘jump start’ upon entry into the real world that a CS bypasses, which can lead to some health burdens later in life.

Very intriguing that there are different methylation patterns in the DNA of infants depending on whether they went through the stress of a vaginal birth vs the less stressful caesarean.

Now to see if this results in any physical differences.