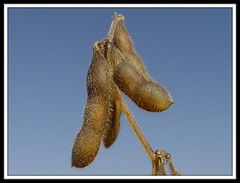 With over 100 diseases that can attack soybean crops, why would charcoal rot rise to the top of the most wanted list? University of Illinois scientists cite the earth’s changing climate as one reason that more research is needed on the fungus that causes charcoal rot.

One of the arguments from denialists is that climate change will not be so bad because plants like carbon dioxide. While this is debatable, what is not often discussed is how much better some plant diseases will do.

Here we have a fungus that likes warm, dry weather. And that also infects 500 other plants, including corn and sorghum, besides soybeans. And it loves salty conditions.

So a resistant plant must be one that is heat-, drought -, and salt-tolerant in order to beat the fungus.

Also, in contrast to other disease, charcoal rot not only kills the plant, it lives off the dead tissue. So, it can thrive living off the leftovers from other pathogens that can only use living plants.

At the moment, no soybean plant is completely immune to this fungus. So these researchers are trying to develop varieties that are able to fight off the fungus.

But those varieties also still need to be highly productive. Not an easy task.