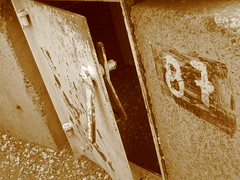 An app that became infamous for its astounding lack of utility has found a purpose: warning Israeli citizens about rocket strikes. As reported by the Times of Israel (via Valleywag), Israelis have been using the app Yo to subscribe to alerts from Red Alert: Israel about incoming attacks during the Hamas-Israel conflict.

Yo was roundly mocked when it secured $1.2 million in funding and again when it was shown to have gaping security holes. It does almost nothing; tapping a contact’s name within the app sends a push notification to that person’s phone and makes it say “yo.” That’s… it.

Now Yo has partnered with Red Alert: Israel, an app that shows users “where the rockets fired at Israel by Gaza terrorists are aimed,” according to the Times of Israel. Red Alert: Israel’s app sounds an alarm during attacks, and it’s meant to work as a backup for the sirens that sound to alert residents. Users who so choose can now receive a “yo” when rockets have been launched.

I love this.  The developers of Yo are nothing if not adaptable. Eight hours of work to create an app that could save lives. From a totally useless app to a reasonably valuable one. Who is laughing now?