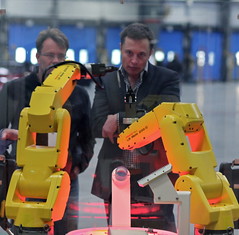 Foxconn is preparing to enhance its assembly process with a new line of robots, the CEO of the iPhone manufacturer’s parent company said during a shareholder meeting. According to the executive, Apple will be the first company to reap the benefits of the new process, likely indicating that the iPhone 6 will be the first phone to be produced by the new machines.

Each of the planned 10,000 robots will cost the company between $20,000 and $25,000, and will be capable of churning out 300,000 smartphones on average. The machines, which are said to be in the final testing stages now, won’t be available for sale to other companies, according to CEO Terry Gou, as Foxconn will likely not have enough to meet its own needs.

Foxconn recently went on a hiring spree in preparation for the upcoming Apple smartphone, reportedly hiring as many as 100,000 new workers. There’s no word yet on how (or if) the decision to implement a mechanical solution on the assembly line will affect those jobs.

This has been coming on for some time. I expect in a few years, Foxconn will have far fewer human employees. Then what will all those people do?