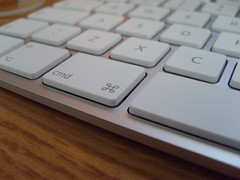 My thanks to Richard Gutjahr for taking time to talk about self-disruption. I met Richard as the Master of Ceremonies at the Censhare FutureDays event in Munich. He interviewed me for his blog and posted the results as a video and sound file. Richard is a journalist (Berliner Tagesspiegel, Frankfurter Allgemeine Zeitung) and TV personality (news presenter for Rundschau night).

Horace and I have met at a conference in Germany a few weeks ago. During a break, we were talking about the future of Apple. Horace made a statement, which I found quite intriguing: In order to remain innovative, it is not enough to reinvent yourself again and again. Apple must be the one to destroy its own business.

Hour-long conversation including audio and video: Apple: Lessons in Self-Destruction.

“In order to remain innovative, it is not enough to reinvent yourself again and again. Apple must be the one to destroy its own business.”

That is what a 21st century company has to do. Google keeps re-inventing itself. Apple tries to destroy itself. The Mac destroyed the Apple II. The iPod destroyed the Mac. The iPhone destroyed the iPod.

What will destroy the iPhone?

(And by destroy, I don’t mean make vanish. Just toppled as the company’s lead money maker.)