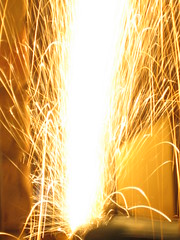 I wish I had been smart enough to use Miller’s ideas on my organic chemistry exams. The ones that said synthesize an amino acid starting from carbon, oxygen and ammonia, for example.

“Put the ingredients in a vessel and apple electricity to a spark gap for 2 weeks. Isoalte the amino acid.”

The answer for almost any organic compound could have been the same.

This is really interesting work but it would appear that the levels of amino acids are quite small. One needs a way to concentrate them so they can become useful for life.