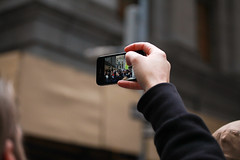 Appeals Court Reaffirms The Public Has The Right To Record The Police, Except For All The Times When It Doesn’t
[Via Techdirt]

In what is being touted as a victory for First Amendment rights, the First Circuit Court of Appeals has upheld the right of people to record police officers in public. This is nothing more than a reaffirmation of a right citizens already possessed, something that can hardly be considered a victory.

The problem is that, despite this being made clear on multiple occasions, people are still being arrested for recording police officers. Sometimes it’s a bad (and outdated) wiretapping law that gets abused. Sometimes it’s other, unrelated laws that are stretched to fit the circumstances, which means those recording officers are hit with charges ranging from interfering with police investigations to criminal mischief, depending on how the interaction goes.

But this ruling has received lots of press, much of which centers on the positive aspects of the ruling — which, again, must be pointed out only affirms a previously existing right. So, while it’s nice to have a higher-level court confirm First Amendment protections, the fact is that this decision was only made necessary by law enforcement’s arguments to the contrary.

You think the syaye will let us continue to film police? This latest court case seems to show that but it has  a really big caveat.

The court said that police could be recorded as long as it was reasonable. And reasonable is simply in the opinion of the officer.

[T]he opinion, after reaffirming what was already the law, put a lot more effort into the caveat:

“This is not to say, however, that an individual’s exercise of the right to film a traffic stop cannot be limited.”

Boom. There it is, the grand right in a few black letters, and then the lengthy explanation detailing how to circumvent and eliminate it. Thanks for the roadmap, bro.

“Indeed, Glik [v. Cunniffe] remarked that ‘a traffic stop is worlds apart from an arrest on the Boston Common in the circumstances alleged.’ That observation reflected the Supreme Court’s acknowledgment in Fourth Amendment cases that traffic stops may be ‘especially fraught with danger to police officers’ and thus justify more invasive police action than would be permitted in other settings. Reasonable restrictions on the exercise of the right to film may be imposed when the circumstances justify them.”

The word “reasonable” is perhaps the most dreaded word in law. First, it is meaningless, left to the sensibilities of judges to decide and a hole big enough to drive a Mack truck through. Second, whenever we see it, we know it’s the opening through which bad things come. Bad, bad things.

So it boils down to this – you can film the police until they ask  you to stop. If you refuse, they can reasonable arrest you for failing to follow police instructions and interfering with them.

Ain’t that swell? Your right to document what public officials do in public can be terminated simply by their request. Follow that request and they can do whatever they want. Resist that request and get arrested.