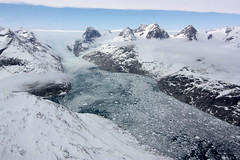 Greenland may lose more ice than expected
[Via Ars Technica]

A pair of reports in the last couple of weeks has delivered bad news for future ice loss in Antarctica. One described the possibility of committing ourselves to several meters of sea level rise if ice in the Wilkes Basin were to become destabilized. The other concluded that we likely have already committed ourselves to over a meter of long-term sea level rise from a portion of the West Antarctic Ice Sheet. In both cases, the ice loss tipping points are a result of the shape of the valleys in which the glaciers sit, which deepen as you move inland, reaching below sea level.

That configuration has long been known to exist below the West Antarctic Ice Sheet, but it wasn’t thought of as a factor in Greenland. Now, a new study from some of those same researchers has revealed that Greenland, too, has a number of deep valleys that dip below sea level. That means Greenland is susceptible to larger, more rapid losses of ice than previously thought.

The topography of the land beneath an ice sheet exerts a large amount of control over the flow of the ice, yet it’s largely hidden from view. Glaciologists have long been using airborne radar surveys to determine ice depth in much the same way that sonar can measure water depth below a ship.

The Greenland data indicate that sea level rise from Greenland is happening faster than thought. How high can the seas rise?

While very unlikely in our lifetime, this thought experiment is useful to show how even a small amount of this ice might impact us. If all the ice in West Antarctica melted, it would raise sea levels about 6 meters. If the Greenland Ice sheet is lost, sea level would rise about 7 meters.

A 13 meter rise in sea level would put Miami under water, as well Galveston. New Orleans would still be there because of the levees but if they went, it would really be impossible to rebuild,since it  would all be under more than 30 feet of water..

Baton Rouge and Houston would have waterfront property. Interstate 3 in San Diego would run over water. San Francisco would actually do fairly well, although all the tech companies South of Market would be underwater. Sacramento would be gone, part of a vast inland sea, extending from Yuba City to Modesto.

Seattle would do alright, although the new Island of Magnolia would be formed. However, Lake Washington would now be directly connected to Puget Sound, raising the level of the lake by about 7 meters.

Lots of economic effects from the millions of people affected. Just 3 meters of sea level rise would affect over 12 million people. Huge numbers would have to be relocated permanently.