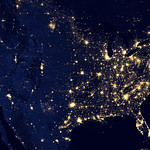 Everything is distributed
[Via O’Reilly News and Commentary]

Very nice discussion of the benefits and worries of distributed approaches to computing, especially the impact on humans.

Failures will happen. One benefit of a distributed approach rather than a hierarchical one is that failure is seldom catastrophic unless you happen to be the server that failed ;-0

Distributed systems can deal with much more complexity than hierarchical ones but that also introduces the greater chance that errors will creep in.

So we need to develop better processes for finding these errors before they have any impact.

Because as humans become more entangled into the distributed network, the more likely that impact could be fatal.