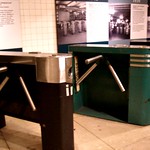 Fare Dodging Is an Organized Rebellion in Stockholm, and It’s Winning.

Interesting article. In Sweden there is an organized effort to dodge fare on public transportation  People join a group for $15 a month. If caught and fined, the group will pay the fine.

Now, the authoritarian approach would be to hire more officials to  write fines. Noone should be allowed to dodge fares. But that costs a lot of money. It would cost more than being lost in fares.

And even if they did, the distributed approach would probably still find ways. I mean, one guy trained his dog to help evade fares.The recognition is  that getting rid of all the evaders will never work.

So most focus on social approaches,making it just inconvenient enough to get through the entrancethatmost people just buy a ticket.

Hierarchies have a hard time with shades of grays but here, that is what works – allowing some level of dodging while making sure the majority will pay.

Trying to get rid of all the evaders would probably cause problems and get the majority to start getting upset.