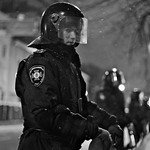 The TAFTA/TTIP negotiations remain almost totally lacking in real transparency, with little information about what exactly is happening behind closed doors being released to the public — and most of that coming from the EU side. This has naturally forced those excluded from the inner circle to speculate about what might be going on — and, inevitably, to fear the worst. According to the US Ambassador to the EU, Anthony Gardner, and the EU Commissioner responsible for TTIP, Karel De Gucht, that’s unacceptable:

The ambassador and commissioner agreed that NGOs and civil society organisations were spreading disinformation about TTIP through social media, such as Twitter and Facebook. De Gucht said that a number of campaigners were “spreading rumours on false grounds.”

Gardner added: “There’s a void [in information]. The void is being filled more and more by social media.”

So the oligarchs cut the public out of discussions while they create secret treaties, releasing little information. Then complain about how rumors are running around.”If only the public knew the facts that we won’t let them have.”

And when the people protest the lack of transparency, police use heavy-handed approaches to squelch the protests.

We will see this happen again and again as totalitarian hierarchies try to retain their power.

I hate to say it but Princess Leia was right.