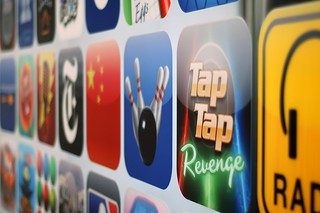 Michael Sayman is not your average tech entrepreneur. For one thing, he’s 17 years old and started making money off iOS apps at the age of 13, rivaling even Mark Zuckerberg’s babe-like founder status. He taught himself to code using online tutorials he found via Google.

For another thing, he lives in Florida. His school doesn’t understand what he’s doing and his parents didn’t entirely appreciate his work until he started helping them pay their mortgage when the recession hit.

Oh, and Mark Zuckerberg personally chose Sayman to be featured at this morning’s f8 developer conference, shortly after his own keynote. Sayman appeared alongside a few other (adult) programmers in a video on the main stage about mobile app development.

Sayman sits on the Pando couch, his round cheeks and freckles — not to mention a mouth glistening with orthodontic work — making him look even younger than his already infuriatingly young age. If his enthusiasm were any more infectious it would require a warning sticker. Instead he wears a blue hoodie with the Facebook logo emblazoned on the front. He pokes his hand into one of the pockets: “Hold on I’m checking something. This will only take a second,” Sayman says. He pulls out his phone and starts scrolling through the iOS app store. He gasps.

“I just beat Garageband and Line. My app is more popular than Line!” He puts one palm on his face and bends over his phone, reading further. “I’m beating Starbucks, Luminosity, Fitbit, Lyft…oh my gosh,” he trails off, overcome with excitement. “It’s number 123 in the overall app store ratings!”

This is what the app economy is all about – no asking permission,no startup costs and no venture capital investment. Michael taught himself whatever he needed to know and the executed.

What an amazing person.