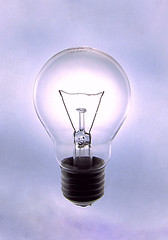 Conversnitch
[Via Schneier on Security]

Surveillance is getting cheaper and easier:

Two artists have revealed Conversnitch, a device they built for less than $100 that resembles a lightbulb or lamp and surreptitiously listens in on nearby conversations and posts snippets of transcribed audio to Twitter. Kyle McDonald and Brian House say they hope to raise questions about the nature of public and private spaces in an era when anything can be broadcast by ubiquitous, Internet-connected listening devices.

This is meant as an art project to raise awareness, but the technology is getting cheaper all the time.

The surveillance gadget they unveiled Wednesday is constructed from little more than a Raspberry Pi miniature computer, a microphone, an LED and a plastic flower pot. It screws into and draws power from any standard bulb socket. Then it uploads captured audio via the nearest open Wi-Fi network to Amazon’s Mechanical Turk crowdsourcing platform, which McDonald and House pay small fees to transcribe the audio and post lines of conversation to Conversnitch’s Twitter account.

Consumer spy devices are now affordable by the masses. For $54, you can buy a camera hidden in a smoke detector. For $80, you can buy one hidden in an alarm clock. There are many more options.

And these will only become cheaper, smaller and more ubiquitous. What happens when conversations that occur in public settings are put on Twitter?

These guys want to push the envelope. It will make intersting corut cases, especially when some are placed close to politicians.