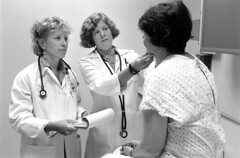 Earlier this month the federal government released a giant trove of data enumerating precisely where Medicare funds were spent in 2012. Since then, there have been many revelations about where and how this government funding is being put to use. One report highlighted how only 100 doctors in the country received $610 million of the funding. Another looked at how the top Medicare billers spent a great deal of their money pushing more expensive drugs.

One facet that has yet to be fully analyzed is the kind of coverage these Medicare billers provide and where they are located. Owen Tripp, the CEO of the company Grand Rounds, showed me some of the stats his company has dug up.

Grand Rounds is a subscription-based company that provides patients with second opinions from top physicians around the country. The idea is that patients should be able to get top second opinions no matter their physical location. Tripp told me that he decided to look into this data to see if he could prove a hunch that those in rural, less well-off areas are receiving worse care. While perhaps not surprising, he found this seems to be true. Perhaps saddest is that this outdated care is actually more expensive.

“We’re seeing massive disparities between state of the art care to the more standard and basic care that you get around the country,” Tripp said.

One example he pointed to was a procedure called a nephrectomy, which is the removal of the kidney. This procedure can be highly risky, and the general practice is becoming eclipsed by what’s called a partial nephrectomy. Studies say this latter procedure has a 19 percent lower mortality raise, and 61 percent lower rate of severe kidney disease.

According to Grand Rounds’ analysis of the data, 81 percent of doctors in populated areas performed partial nephrectomies, whereas only 44 percent of those in rural areas did. What’s more astonishing is that a partial nephrectomy is generally cheaper, and could save patients an average of $65,000.

As Tripp explained, most outdated procedures are “more expensive and create other issues down the line.”

Identifying the differences is the first step to rectifying the disparities. Rural communities should not be tied to a procedure that is more expensive and had a worse prognosis.

The other observation – that doctors of different ages use different procedures – is not surprising and also needs to be examined.

Using procedures that are the best for the patient is what we should shoot for.