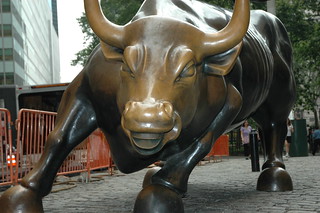 “Last week was a particularly bountiful one for investors in big dividend-paying companies,” Shirley A. Lazo reports for Barron’s. “Leading the charge was Apple, which on Wednesday served up a 7.9% payout boost, an unusually large 7-for-1 stock split, and a sweetened share-buyback plan. Furthermore, earnings and revenue surpassed Wall Street’s expectations on strong iPhone sales.”

“The electronics giant enriched its quarterly dividend to $3.29 a share from $3.05, which is worth an additional $827 million annually to investors and gives the stock a 2.3% yield. Last year, Apple added $1.5 billion to payouts; the company had resumed quarterly disbursements in March 2012 at the rate of $2.65 a share, after having not paid anything since a 12-cent distribution in December 1995,” Lazo reports. “The increase to $3.05 came in April 2013. With the new quarterly, Apple is the largest Standard & Poor’s 500 dividend payer, ahead of ExxonMobil and AT&T.”

Having the largest dividends in the S&P 500 will bring in a different investor than before. and the lower stock price will invite people to purchase the stock rather than leverage stock options.

Apple’s previous owners – those that liked to churn stock options and fasten onto a high flying growth company – had not done a good job valuing Apple, keeping its PE ration far below Walmart or others, while valuing Google at outrageous levels.

Perhaps putting Apple stock back in the hands of a real market rather than the heavily leveraged, out of touch market of the Wall Street elite.