The less Americans know about Ukraine’s location, the more they want U.S. to intervene
[Via Washington Post]

Since Russian troops first entered the Crimean peninsula in early March, a series of media polling outlets have asked Americans how they want the U.S. to respond to the ongoing situation.  Although two-thirds of Americans have reported following the situation at least “somewhat closely,” most Americans actually know very little about events on the ground — or even where the ground is.

They surveyed over 2000 people. They asked them to find Ukraine on a map and to indicate whether the US military should intervene against Russia.

The farther their guesses were from Ukraine’s actual location, the more they wanted the U.S.  to intervene with military force.

The more ignorant, the more they wanted to use force. 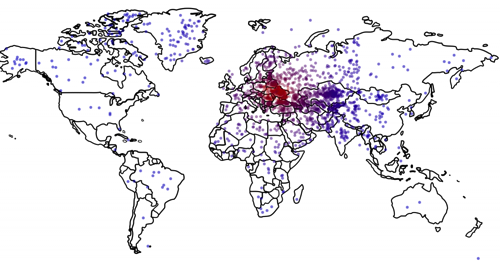 Only 16% of Americans knew where Ukraine was. Fifty percent were over 1800 miles off.

Even the demographics are depressing. Members of military households were no more likely to know where Ukraine was than non-military, Seventy-seven percent of college graduates failed to find Ukraine.

Both Republicans and Democrats were similarly ignorant. Younger people did slightly better than older but not much better.

And how does this correlate with their attitudes regarding military action?:

However, the further our respondents thought that Ukraine was from its actual location, the more they wanted the U.S. to intervene militarily. Even controlling for a series of demographic characteristics and participants’ general foreign policy attitudes, we found that the less accurate our participants were, the more they wanted the U.S. to use force, the greater the threat they saw Russia as posing to U.S. interests, and the more they thought that using force would advance U.S. national security interests; all of these effects are statistically significant at a 95 percent  confidence level.