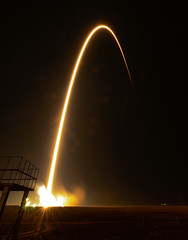 During his testimony, Bolden argued for “the critical need for this nation in space.” He stated that granting what NASA has requested for the next year would aid in keeping a program on track that supports American companies developing spaceships to carry astronauts to the International Space Station.

So, in order to keep the cash going for the Orion project, they want to cut the commercial space program, the only real hope to provide American access to the ISS.

And they cannot understand why the administration blames Congress for us being dependent on paying the Russians for access to space.The inability to understand cause and effect is telling.

Why in the world are we nickel and diming NASA to death, making all its efforts subject to such stupid political games? Yet we are paying billions for military hardware the military does not even want?

Because we keep electing so many idiots and anti-science representatives? Soundslike a reasonable hypothesis.