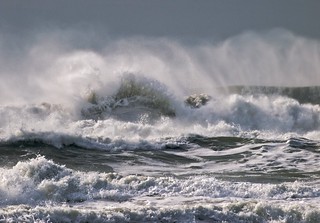 (A monster Kelvin wave, possibly more powerful than the 1997-98 event, is now rushing toward the surface of the Eastern Pacific. Image source: NOAA/ESRL.)

We are observing an extraordinarily powerful Kelvin Wave, one that was likely intensified by factors related to human global warming, traveling across the Pacific. It appears to be an epic event in the making. One that may be hotter and stronger than even the record-shattering 1997-98 El Nino. What this means is that we may well be staring down the throat of a global warming riled monster.

Good times might be over. If this new El Nino is anything close to the one in the late 90s, temperatures could begin rising fast. That first animation is shocking.

There appears to be more heat in this water than was in the huge El Nino of 1997.It was the largest such event in the 20th century. The global temperatures due to that event increased to such hugh levels that it would be almost a decade before the world became that hot again.

This is what happened along the Washington Coast during the 1997 event: huge rises in sea levels making storms much more destructive along the coast.

And while it may break the drought in Texas, it could well bring huge amounts of flooding due to extreme weather events. That it, lots of frog stranglers hitting dry ground and running off instead of penetrating.

The West Coast will get little rain and be much hotter, so the food producing areas of the state will be hard hit.