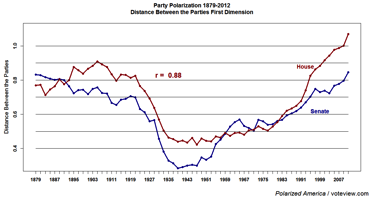 If you have been wondering if we live in unique times, this chart will demonstrate that we do. Congress today is like no other.

Have some fun playing with the slider in the graph. It plots the data from VoteView, some of which I have discussed before. It compares every Congress since 1857.

The x-axis essentially charts how liberal or conservative  each member of the Legislature is. I can see that one of the most liberal Democrats ever – from the 56th Congress –  has the same last name as me.

And what you can really see is the increasing partisanship over the last few Congresses. Compare the Congresses of the 30s and 40s to the most recent The difference is striking.

You can chart the rise and fall of moderates in American politics. They are all gone now.

You can see that some Congresses have been very partisan.But the most recent Congress is more partisan than any other one.

Never have we seen so many Congresses in a row so widely split. Ten years where party unity is over 90% for both parties. This degree of lockstep voting is unprecedented.

The chart does a nice job showing that while there have been other periods in American history where there were partisan Congresses and no moderates,  Congress now is unique.

I do not think we can sustain this for very long. As Lincoln stated, ” A house divided against itself cannot stand.”