Trevor Brandt-Sarif had no interest in computer science when he arrived at Harvard in 2011. Philosophy was his thing. Writing code? That was for those kids at MIT.

But while taking the requisite Introduction to Ancient Philosophy, Brandt-Sarif also veered about as far as you can from Socrates, Plato, and Aristotle in a Harvard classroom: He enrolled in the wildly popular computer science course, CS50, joining hundreds of other undergrads to learn what has become the language of the 21st century.

“Coding is relevant to our world,” said Brandt-Sarif, who credits professor David Malan for making computer science come alive in everyday life. CS50, Brandt-Sarif said, is “very much the thing to do.”

Harvard has been the place for a classical education to be taught to the intellectual elite of our nation. Learning about actually doing anything was beneath Harvard.

A former Harvard dean humorously put it this way: “In the late 19th century, it was considered fine for MIT, but a real college student shouldn’t have their mind polluted by thinking about anything useful.”

But things are changing a lot as the world changes. Doing useful things, thinking about useful things – especially with technology – is the future. Harvard has watched as MIT, Stanford and CalTech march forward into the 21st century while it remained in the 19th.

Looks like things are changing. Not only is it promoting things like CS50 – a class with 700 students that is not even close to an easy A – but things like engineering now actually  are a school rather than just a division in another school.

Who would ever have thought that a CS class at Harvard would be so popular. There are High School students in developing countries who are following the class, with some of the best now arriving at Harvard to do CS or engineering. Even the ones who want to be doctors are taking the course.

Harvard is supporting these changes in new ways. There are over 100 staff supporting CS50. Here is the syllabus. Videos are produced for students to watch. It has its own webpage at Harvard. It has its own merchandise. Almost everything is online where we all can look at the slides or notes.

Look at how its popularity has skyrocket as the last decade progressed. 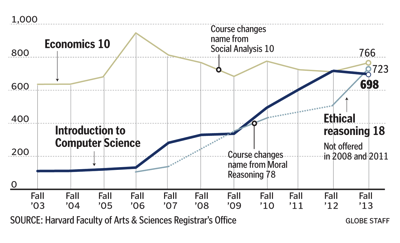 Computer Science and Ethical Reasoning are now two of the most popular classes at Harvard. Who’d have thought?  Maybe it will have a lasting effect.