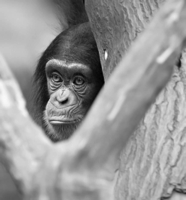 Our genome isn’t static; some of it can move about. We’re loaded with stretches of DNA that can copy themselves and paste their duplicates into new locations, increasing their numbers as they go. These sequences, known as retrotransposons, have become so abundant that they make up more than 40 percent of our genome. They’ve probably been a major force in our evolution. Depending on where they land, they could either disrupt genes in debilitating ways, or act as building material for new adaptations.

The majority of our retrotransposons can no longer jump. They’re genetic fossils, which have mutated so much that their days of wanderlust are behind them. But one group of sequences—the L1 or LINE-1 elements—includes a small number that are still on the move. They’re still copying and pasting themselves, still creating variation between people, still causing disease.

It seems that our genome takes a particularly conservative attitude to L1 elements. By comparing our cells to those of our closest relatives, chimpanzees and bonobos, Carol Marchetto and Inigo Narvaiza from the Salk Institute for Biological studies have shown that we keep these slippery bits of DNA under a particularly tight leash. By contrast, the other two apes allow L1s to move with much greater abandon—a trait that might help to explain why their genetic diversity is far greater than ours.

Marchetto and Narvaiza began by reprogramming skin cells from four humans, two chimps and two bonobos into a state where they’re almost like stem cells. Rather

It is always fun to find things that make humans unique. Here it is because our genes prevent us from being very different from one another. The reasons for this lack of genetic difference are quite intriguing.

Here we find that Greg Bear may have been onto something in his book Darwin’s Radio – the control of bits of DNA such as these L1 transposons may be responsible for the rise of humanity. And, in doing so, it has made all of us more closely related to each other – all 6 billion of us – than the chimpanzees in West Africa.

Start with this: there is greater genetic diversity in a few troops of chimps in Africa than in all of humanity. Why? Perhaps this paper shows us one reason.

By suppressing these jumping genes, human genomes become more static, much less diverse. In chimps, the translocating activity of these genes can turn on genes, turn them off or move genes around. This acts to make their genomes much more diverse, even in the same family. The offspring can have different genomes in small ways than either parent. It is like a form of recombination, shuffling genetic material around.

So, our genome does not change as rapidly as chimps. Thus, in say 200,000 years, chimps will have many, many individual changes in their genome. Yet humans will have very few.

Now, the interesting thing is to ask why these suppressing genes are so much active in humans? An interesting hypothesis derives from 2 facts – 1) there seems to have been a bottleneck in human evolution about 200,000, and 2) these genes also act to suppress viral infections.

Together this suggests that there might have been a large viral pandemic about 200,000 years ago that killed off most everyone who did not already have a mutation providing viral resistance. Fortuitously, the selection for these genes saved mankind.

But they also act to reduce diversity of our genome. This is one of the hallmarks of humanity.

Now this is just an interesting model and much work needs to be done. But one possible sidenote is that a human ‘tribe’ is more closely related genetically than a chimp tribe, even if that tribe includes most of humanity. In fact, chimps in a large group may have more diversity than humans form different sides of the globe.

Perhaps this is why we can recognize humans from varied cultures as primates just like us, in ways not seen with other primates. They are more like us than found in other primate groups. It might help explain why our societies are much more complex than chimps.

No matter who we work with, it feels like family.