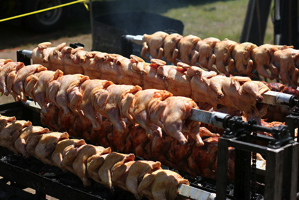 Late-breaking news, and I’ll update as I find out more: While the government is shut down, with food-safety personnel and disease detectives sent home and forbidden to work, a major foodborne-illness outbreak has begun. This evening, the Food Safety and Inspection Service of the US Department of Agriculture announced that “an estimated 278 illnesses … reported in 18 states” have been caused by chicken contaminated with Salmonella Heidelberg and possibly produced by the firm Foster Farms.

One major reason they are not able to link the outbreak to a specific plant is because the researchers at the CDC who can do the molecular fingerprinting and such are furloughed. As are the people who coordinate the many state health commissions involved.

Each state can still do the reporting as normal but the ability to coordinate multiple states is greatly hampered. The likelihood that many, many more people than 300 have become ill is huge. And, if this follows previous outbreaks, over 90 of those people were hospitalized, costing each thousands because of the food they ate.

So stay away from Foster Farm chicken. Cook your chicken. And hope the outbreak is only limited to 18 states