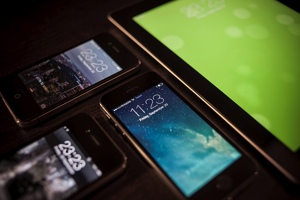 The debut of Apple’s new 64-bit A7 Application Processor has been assailed by more than one industry figure insisting that the new chip isn’t anything special, but a series of iOS developers are reporting huge performance gains and already using the new chip to accomplish “desktop class” tasks that were not previously possible on a mobile device.

First, the new iPhone can equal the same processing power of  chips found in much larger devices requiring much more power. It is fast and efficient in a small package.

This lets apps with high computational overhead to work great in a handheld supercomputer. Things can now be done in real time that were simply impossible before in a smartphone.

We can all carry around a high power video production suite in out hands. Its got the camera. It has the computing power and now this:

Wow!And developers are having to redo software becasue the A7 can do calculations so fast. As one described:

In optimizing other titles for the A7, Smith noted, “we discovered an issue on the A7 with our Cinebeat product which does real-time audio and video process (also CPU intensive). It deadlocked as a set of processes that were never supposed to finish first suddenly did. We were shocked.”

S will a lot on other hardware makers. 64-bit is where smartphones and tablets have to go.